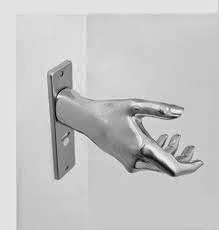 It's that moment when you're about to enter familiar territory through a regular door, but all of an existential sudden, the knob in your hand is an alien object, not to mention the foreign quality of your own hand.

That moment of unfamiliarity can happen to writers in a variety of ways. There are the little gaps such as when you can't recall a word or when its spelling looks suddenly odd on the screen.

Then there's the state of unknowing that spreads farther: when the blank is larger than the space a few temporarily absent syllables could fill. As with much about the process movement of writing instruction from the 1960s, 70s, and 80s, the tenet that "writing is discovery" approaches mindfulness. I often paraphrase Robert Frost, I write to know what I didn't know I knew, to my writing students to train them away from thesis-driven ways of writing in their creative work. Behind the idea of writing as discovery seems to a basic desire to stay interested and stay interesting: the basic notion goes like this, "If the writer is bored, the writing will be boring. If the writer is surprised, that energy will be passed onto the reader." The impetus toward not knowing can also come from a desire to sustain Invention--the experience of generating new material without regarding future readers' needs for clarity or explanation.

The stakes feel higher though than just keeping amused when it comes to knowing and unknowing.

In a recent article in the magazine Bomb, the artist Paul Chan is quoted as saying "Sometimes when I make work, there is a moment when what I want to make and what I make it with, fuse in such a way that the piece begins, against my intention, to take on a form of its own. It is as if I am no longer the prime mover. At this point what is in front of me becomes as strange to me as I am essentially to myself. This is the point I am always trying to reach."

Paying attention to what is paradoxically can lead to silence and to blanks. To nothing. This pre-verbal state is part of present awareness: it occurs before a word arises in the mind for an experience, before the experience can be labeled, judged, and freighted with association.

In Zen Mind, Beginner's Mind, Suzuki describes mindful breathing in a way that suggests a swinging door onto blankness and unknowing: "When we inhale, the air comes into the inner world. When we exhale, the air goes out to the outer world. The inner world is limitless, and the outer world is also limitless. We say 'inner world' or 'outer world,' but actually there is one whole world. In this limitless world, our throat is like a swinging door. The air comes in and goes out like someone passing through a swinging door. If you think, 'I breathe,' the 'I' is extra. There is no you to say 'I'...What we call 'I' is just a swinging door which moves when we inhale and when we exhale. When your mind is pure and calm enough to follow this movement, there is nothing: no 'I," no world, no mind nor body; just a swinging door."

We need a phrase in English that's the equivalent to "blacking out" (meaning that a person has fainted or lost consciousness). It would be a phrase for the gap in consciousness, this blank moment of breathing in, breathing out. Unfortunately, "white-out" currently refers to dabs of white paint applied to erase errors.

Writers need to strengthen their ability with the pre-verbal. It's like developing one muscle group by working with an opposite muscle group. The pre-verbal can be a powerful contrast to the rushing-in of inner talk. Absence makes Presence. The pre-verbal is different too from silence in the ordinary sense: silence is filled with the script of internal conversation. The pre-verbal is not a social silence; it's a non-human, non-ego silence. It can't be taken for granted and instead needs to be fostered through careful training. Perhaps the moment of non-knowing is the apex of a writing class, but how to explain to others that the highest goal of a writing class is to notice when language is not occurring, not being used? Learning how to not-know may be one of the few times in which actual formal seated meditation is the best method for mindful writing. I can't think of a better method for perceiving those blanks than meditation.
Posted by Alexandria Peary, MFA, MFA, PhD at Sunday, June 22, 2014