As Simple as Changing Pens 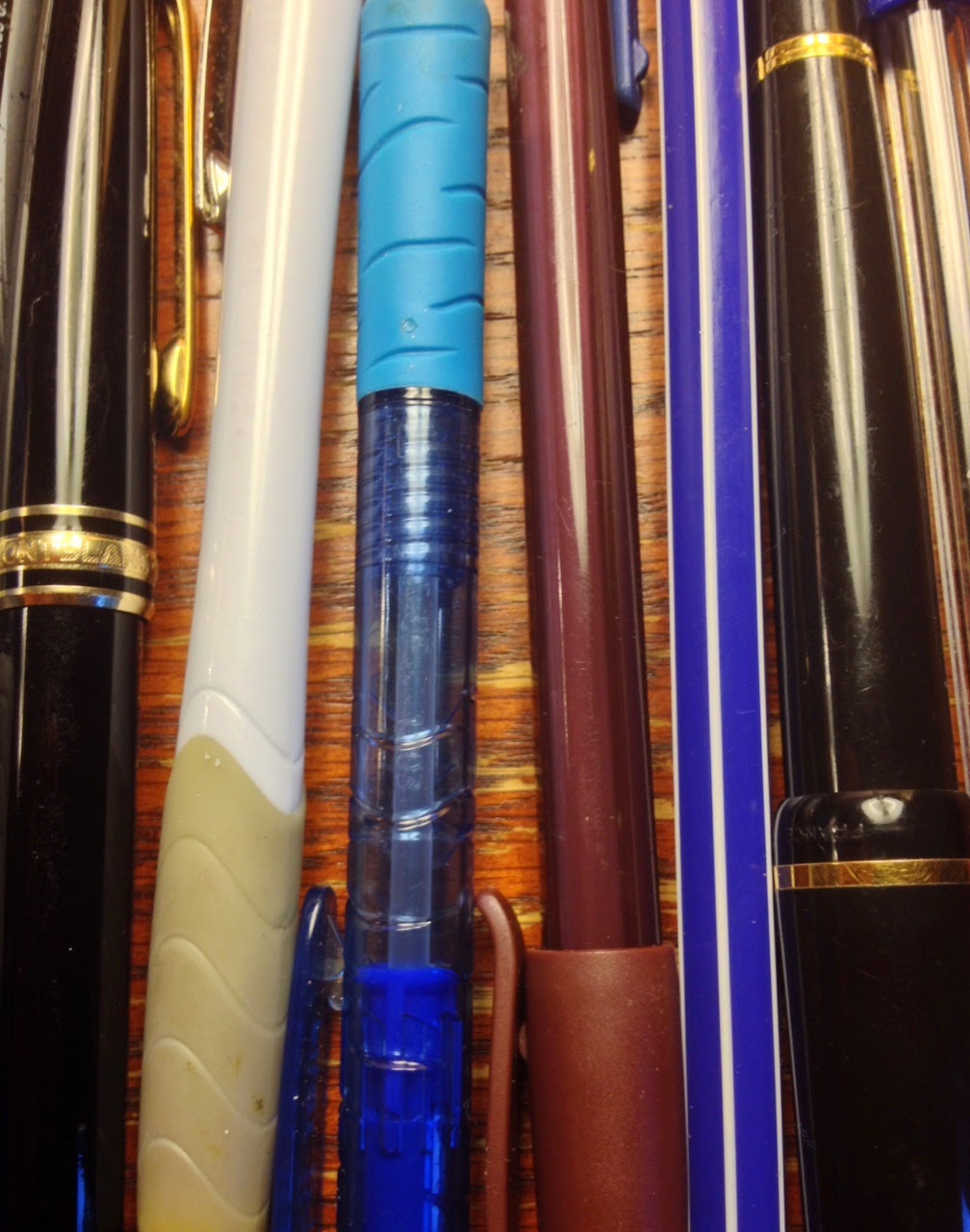 It can be as simple as changing pens.

You want to be mindful as you write and reduce your obstacles? Change pens.

A moment ago, this idea came crystal-clear. I've known for awhile to trust the childlike use of different writing implements in the act of composing.

I've been telling my students (especially in theory courses on writing blocks) that drafts written with several implements automatically insert distance between writer and eventual audience. It's a quick & easy way to gain a little mindfulness on our readers.

Typically, we don't turn in final drafts written with two or more pens, so changing the material aspects of our writing (i.e.: the ink that's physically used to physically construct the pieces) gains us time & space from critics. (Especially the case if we use "inappropriate" utensils like crayons or magic markers or pastel inks.) So I've said this for awhile--known this for awhile.

What I just realized, though, is that changing pens mid-stream, moving from a Mont Blanc to a Bic ballpoint to a pen found on a sidewalk, from black to blue to brown ink, reflects changes in time. Changing pens says that it's a new writing moment, that the phrase or idea in the different ink is on a distinct floe in that passing intrapersonal word river. It means then that you are attuned to the moment, and in that moment, all is possible with words.

Changing pens also implies an attempt to not be unified, not hold things together, not be coherent. To hold yourself together, to hold your writing together, at early stages of invention indicates you are taking undue precautions for a future audience (and that means you have departed from the actual moment). Recall that on most occasions our eventual reader does not inhabit the same space & time that we do as we write & that we should take full advantage of that absence.

However, in a passage like the one you've just read, I did not change my original pen in my blog notebook (where I draft blog posts). A state of flow, usually described as inspiration, glues together such writing with more continuation of internal voice. Thus it's a sense of a non-stop moment, a Tempo, of "getting it all down before it slips from your mind." What I've noticed, though, about that state of flow is that I will change pens to highlight ideas I deem to be strong, to remind myself to pursue them later. So at that moment, I am letting in evaluation (i.e.: sorting some of my sentences on quality).

In that way, I am purposefully situating that bit of writing in another moment of time: one in which I revise. I am prodding that particular phrase into a future time. So in the end I have naturally gravitated toward recognizing the different moments which produce text--continuing to use something as basic as a change of pen to suggest a change in time.

So in my draft of this blog post, the above was written with my Mont Blanc in black ink and then this passage was written with a Pilot B&P blue ballpoint: It's about how changing materials parallels changes in moments--and recognition / acceptance of that change (called "groundlessness" in Buddhism) reduces the suffering of writers.