The 3 Paradoxes of Mindful Writing 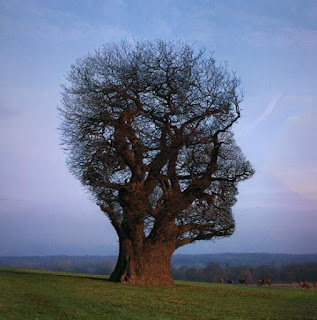 The act of writing is built on several paradoxes.

Carl Rogers said something similar in “Communication: Its Blocking and Its Facilitation” when he said that a person’s problems communicating with others result from her problems communicating with herself.  In mindful writing, this means that as soon as an individual pushes that bar too far to the audience side in an effort to meet others’ expectations or standards, she is less able to have intrapersonal communication (or communication with the self).  Intact intrapersonal communication is required for interpersonal communication (or communication with others).  This means that monkey mind--discursive thinking--is required for writing that is eventually shown to others.  While we might think we are having problems writing to Mr./Ms./Professor Difficult Audience, we are actually having problems communicating with ourselves.
Paradox #2:  Writing is largely known as a cognitive or thinking act when it is actually a physical action in which bodily sensations and the physical attributes of the objects used are crucial to prolific writing.
While several scholars and popular authors have connected the work of writing to meditation or breathing techniques, largely in an effort to relax or ground the would-be write, only a handful of scholars have correlated one’s physical presence to the invention of written material.
Sondra Perl’s theory of felt sense, based on the work of Eugene Gendlin, directs attention to noticing how knowledge arises in the body—how ideas are bodily intuitions.  In discussing the writing process, Keith Hjortshoj suggests that the process is not simply a set of cerebral phases (brainstorming, drafting, revising) but that “movements within the writing process” are also physical movements:  “Like almost everything else that we do, writing is both mental and physical.  And if these dimensions of the self in the world are not coordinated, writing will not happen.”
More often than not, thinking about one’s fingers as they type would probably do a writer far more good than thinking about any made-up reader.
Paradox #3:  In order to optimally succeed with writing, one’s primary allegiance must be to the present moment, not to the text.  One needs to stay mindful, no matter what is happening during one’s session at the computer.
Everything is transitory and impermanent, and suffering comes from resisting that reality.  Even one’s best ability to write—during a long lucky streak—is in actuality in flux.  If one bends closer to look, that happy ability or inspiration also fluctuates, wavers, and differs in texture and character in each moment, like a flame.
Groundlessness means staying in full awareness of the fact that everything is constantly changing including matters pertaining to writing.  The good news about impermanence is that a writer’s block, however impervious it may appear, is actually in fluctuation and temporary, part of a moment.  As Suzuki says in Zen Mind, Beginner’s Mind, “When the Buddha comes, you will welcome him.  When the devil comes, you will welcome him.”
Change serves rather than hinders writing. In academic circles, this would mean that the rhetorical canon of invention can be redefined as being observant of that change.